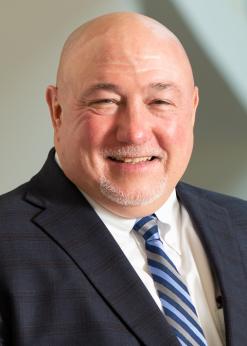 Patrick F. Jordan, III, MBA, joined Dartmouth Health on November 20, 2017, as the Chief Operating Officer. In this role, Jordan oversees the operations of a 2.6 billion organization and ensures the ongoing delivery of efficient and effective operations and shared services across Dartmouth Health. The health system includes the only academic medical center in New Hampshire, four other member hospitals in New Hampshire and Vermont, a visiting nurse and hospice organization serving New Hampshire and Vermont, and a large community group practice, in multiple locations, in Southern New Hampshire.

Jordan previously served as the Chief Operating Officer at Lahey Hospital & Medical Center in Burlington, Massachusetts, where he oversaw more than 5,000 employees, $1.2 billion in operating revenues, 350 inpatient beds and a vast outpatient enterprise. In addition, he was responsible for the real estate and supply chain portfolios for the entire Lahey Health System.

Prior to Lahey, Jordan served as the Chief Operating Officer of Newton-Wellesley Hospital, in Newton, MA, where he was tapped to serve as Interim President in 2012. In his early years at Newton-Wellesley, Jordan was instrumental in the implementation of a financial recovery plan. He spent eight years before that at Massachusetts General Hospital in Boston, MA, as the Director of Radiology and as Manager in Materials Management.

Jordan earned an Executive Master of Business Administration from Suffolk University in Boston in May 1996. He is also a seven-year veteran of the 82d Airborne Division and United States Army Special Operations community. Trained as an Airborne Ranger, he was promoted to the rank of Captain during the invasion of Panama and was awarded the Bronze Star during the Persian Gulf War.