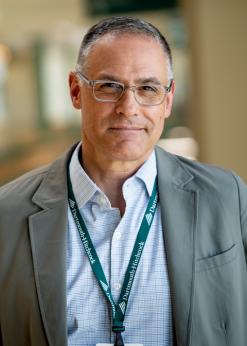 Edward J. Merrens, MD, MHCDS, is the Chief Clinical Officer for Dartmouth Health. In this capacity, he works closely with the chief executive officer and chief officers, chairs, center directors and chief medical officers to develop, coordinate, and enhance clinical operations and care across the Dartmouth Health system, from our academic medical center, to the Community Group Practice and member hospitals as they work to deliver efficient, high-quality patient-centered care across the region. He also continues to practice clinically as a hospitalist at Dartmouth Hitchcock Medical Center.

He is a 1988 graduate of Dartmouth College, and a 1994 graduate of the Dartmouth Medical School (now known as the Geisel School of Medicine at Dartmouth). He completed his internship and residency in Medicine at the University of Washington Medical Center in Seattle, Washington, in 1997. He then served as the Inpatient Chief Resident at University of Washington's Harborview Medical Center in Seattle from 1997 to 1998. In 2013, he graduated from the Master in Health Care Delivery Science Program at Dartmouth and the Tuck School of Business.

Merrens served as a team physician from 1999 to 2014 for the United States Olympic and Paralympic Committee and USA Biathlon and was a member of medical team for U.S. Olympic Teams in Salt Lake City, Utah (2002), Torino, Italy (2006), Vancouver, Canada (2010) and Sochi, Russia (2014). He currently serves on the Board of the United States Anti-doping Association (USADA) and the Partnership for Clean Competition (PCC), dedicated to preventing doping in sport and advancing anti-doping research.