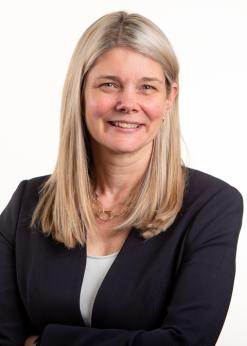 Jennifer E. (Jen) Gilkie is the chief communications and marketing officer for Dartmouth Health, heading system-wide communication and marketing strategy and initiatives across the organization. She is responsible for brand reputation and recognition, marketing, and paid and earned media campaigns, as well as overseeing digital services, creative productions, and content development.

Jen brings to her role more than 20 years of broad-based management experience in both the private and not-for-profit sectors. Most recently, she led Dartmouth Health through a successful and comprehensive rebrand. Jen also led Dartmouth Health's award-winning public-facing and internal COVID-19 campaigns.

A Massachusetts native, Jen spent 25 years in New York City where she was recruited to serve as vice president, external affairs for NewYork-Presbyterian (NYP), one of the nation's largest academic health systems. At NYP she was responsible for leading the development and coordination of a unified external affairs and community relations strategy across NYP's Regional Hospital Network and Medical Groups comprised of more than 800 physicians and licensed providers in nearly 80 practices. Immediately prior to joining Dartmouth Health in 2017, Jen served as chief operating officer for Celerity Health Partners where she served as a key advisor to the CEO and provided consulting services to a number of private equity health care organizations.

Known for building strategic alliances and partnerships, Jen served as senior vice president and chief of staff for the 2014 NY/NJ Super Bowl Host Committee, helping to raise necessary funds to support the start-up and execution of the $80 million business. In that role, she oversaw operations and the planning for all events in partnership with the National Football League, businesses, and community leaders in New York City, New York State and New Jersey.

Prior to Super Bowl Host Committee, she spent 12 years at American Express in various communications, operations, and event management leadership roles. She directed all client and employee events for the Global Leadership Team including serving as the lead for the 2000 Olympic Games in Sydney, Australia and the 2002 Olympic Winter Games in Salt Lake City, UT; and the CEO's annual client entertainment events. During her tenure with Amex, she received recognition for successfully executing key "C-level" global and domestic events, including the creation of an acclaimed Executive Women's Golf program. Jen served as chief of staff for the President of Amex. Jen has also held various marketing and events positions in the not-for-profit arena, including with the New York City Opera, the Royal Academy of Arts, Carnegie Hall and the Public Theater/New York Shakespeare Festival.

Jen earned a Bachelor of Arts degree in theater from the University of New Hampshire. She serves on the boards for the New Hampshire Women's Foundation and the New Hampshire Business Council for the Arts. She lives in Amherst, NH, with her husband, Derek Lucci, and their daughter, and is frequently found in the garden, baking, hiking through the woods and, when time allows, curled up with a book.