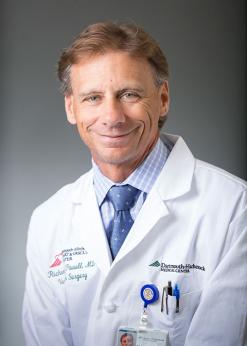 Rick’s research interests focus on the health care economics of vascular care delivery and the minimally invasive treatment of vascular disease. He has published numerous studies on the use of gene therapy and stem cells in the treatment of patients with peripheral vascular disease. He has been or is currently the National or International Principle Investigator on multiple Gene Therapy and Stem Cell Therapy clinical trials, including the first-in-human use of HGF gene therapy to treat patients with critical limb ischemia. He has had NIH funding continuously since 1997 and has served as a member on multiple NIH study sections. He has chaired the Research Council and Clinical Research Committee for the Society of Vascular Surgery.

As a busy clinical vascular surgeon, Rick has realized firsthand that the current costs of delivering medical care are not sustainable. Over the last four years, he has led efforts within the Section of Vascular Surgery to use process improvement techniques in the development of care pathways for complex vascular surgery procedures. This has resulted in streamlined approaches to patient care and the incorporation of evidence-based algorithms that also factor cost into implant selection. This work has resulted in improved patient satisfaction, maintenance of high-quality outcomes, and substantial reductions in cost. This has also become a central theme of the section and has been incorporated into the section’s academic portfolio as well as resident and fellow educational programs.

Rick enjoys cycling and cross country skiing and lives with his family in Etna, NH.